An Adirondack native, Grace grew up with the high peaks in view and lived life guided by the admonition her father offered as she set out to climb her very first high peak, Mount Marcy, in August 1922: “It doesn’t matter whether you reach the top, what matters is how you make the climb!” Reaching Marcy’s summit was a life-changing experience for Grace and started her climbing and talking about mountains, a passion that became her life’s work.

Grace went on to climb all 46 of the Adirondack high peaks, the 9th 46er, a term coined by the 46rs of Troy, a group Grace helped form in the 1930’s.  She was the first of many women to mark the achievement. Grace turned that experience and her love of  NY State into a life of public service, promoting New York’s history, folklore, attractions, and natural resources and helping build the State’s tourist economy. She became an advocate for building trails and shelters, opening more wilderness to recreation, preserving the forever wild character of the high peaks, and encouraging reverence for mountain wilderness.

In 1948, Grace helped establish the social and service organization the Adirondack Forty-Sixers, Inc., comprised of persons who climbed the 46 high peaks. Grace served as the organization’s first president and club historian. Drawing upon a tradition established by the 46rs of Troy, Grace encouraged climbers to write about their experiences boldly proclaiming that “any mountain worth climbing is worth writing about!”

For more than 50 years, Grace devoted herself to building relationships with and within the growing community of mountain enthusiasts, kept records for each aspiring 46er and a list of those who had achieved that goal. She received and personally answered thousands of personal letter reports offering encouragement, guidance, advice, support, and friendship, a tradition that distinguished the 46ers from all other climbing recognition groups and forming a unique element of the cultural heritage of the Adirondack region.

For more than a quarter century, the endowment Grace created has served the public, funding programs that advance and promote public knowledge, understanding and appreciation of the unique history, literature, folklore, common experience, relationships, traditions, and cultural heritage associated with responsible and reverent wilderness adventuring in the 46 Adirondack High Peaks.

My Mountains!
Soft scented trees sway to and fro
Where laughing brooklets gaily flow.
Majestic, wooded mountains rise
To meet the softly tinted skies,
The Adirondacks!
Deep rocky chasms oft extend
And with the hills abruptly blend;
While o’ver the hillsides’ dotted green
Alluring trails are dimly seen.
The Adirondacks!
Transparent, shining lakes repose
Embraced by every breeze that blows.
A silvery moon sends rays that gleam
Where peace and beauty reign supreme–
The Adirondacks!
I claim these mountains for my own.
I’m happy here–I am at home! 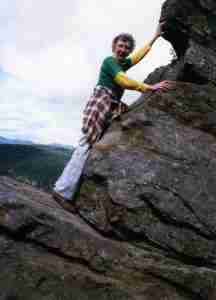 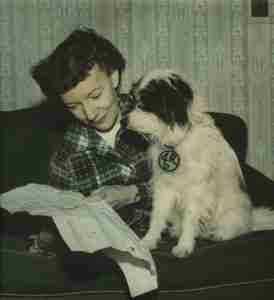 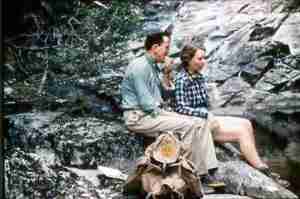 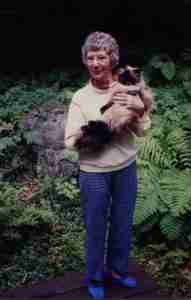 Grace with Ktu at Boulders 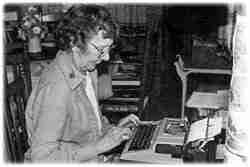 Grace at Work on 46er Correspondence