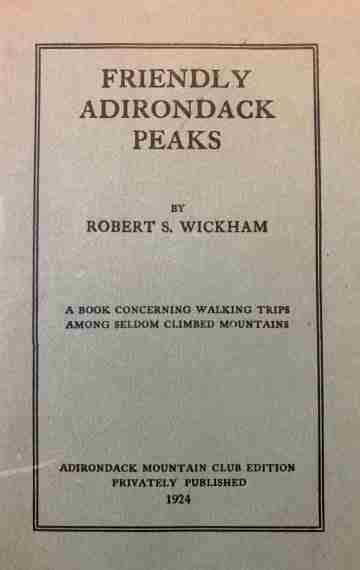 Robert Sloane Wickham hailed from Ballston Spa born March 14, 1877. Intending to pursue a career in law, Wickham took a brief hiatus and read the law for a time with a firm in Binghamton NY while attending Binghamton High School. He ultimately graduated from Saratoga Springs High School. In 1897, he won a scholarship to Cornell University Law School and graduated with a Bachelor of Law degree in 1902. Wickham married Eloise Cameron Carpenter in 1905 and in 1908 they returned to Schuylerville where he opened a law practice. In 1911, the couple returned to Binghamton where he took a position with the Chief Counsel of the Excise Department of New York State. He was an avid hiker and wrote two books, Friendly Adirondack Peaks (1924) and A Saratoga Boyhood (illustrated by Anne Allaben), a lighthearted collection of tales of his youth in and about Saratoga (1948).

Wickham’s memoir recounts a three (3) week excursion into the high peaks with his son and five-year-old fox terrier “Kim” between August 7 and September 1, 1923. Wickham kept detailed journals throughout his life and was a handy photographer as well. His detailed account of hiking through the Cold River region and ascending Santanoni, then proceeding into the Lake Colden region, on through the Great Range, Giant, the Dix Range and then ending at Elk Lake is one of the finest records of the conditions existing at the time and is interspersed with memories of earlier adventures Wickham had taken into the area. While Wickham’s account does not reflect upon or lament the carnage recorded by the Marshalls and Clark, his account does provide interesting descriptions of the lumbering operations in the Lake Colden area and the use of old survey cuts to reach summits like Santanoni—conditions long since reclaimed by nature.

In the Forward to his work, Wickham writes almost adoringly of the accessibility, splendor and remote wildness of the “Friendly” mountains of northern New York and, as was the case with ADK’s publication of the Marshall text, invites others to explore the region.

“The adjective friendly is properly descriptive of the Adirondacks Mountains. I have a friend who has climbed in Switzerland, the Rockies, Alaska, but he comes summers for walking trips among mountains not too large to repel, but of a size to invite, and large enough for reasonable exertion, enjoyment and beauty of views. There are many wild spots hidden among these hills, to be enjoyed only by packing for two or three days or more, and trips may be taken across the region, in various directions, still giving the taste of virgin wilderness. The following narrative, which grew out of a habit of keeping a journal, is written with the belief that others may learn, through our experience, how to enjoy some of this wilderness, and in the hope that something of the quiet spirit of the hills may be reflected from its pages.”

Like Marshall’s memoir, the Wickham narrative is long out of print, infrequently available, and when found commands a significant price. The work is in the public domain and can be read online through Internet Archive at https://archive.org/details/friendlyadironda00wick.

As one of the 4 significant mountain climbing texts of the 1920s, the Trust is considering an update and reprint of Wickham’s memoir in 2024, to coincide with the Centennial of its publication. Check back at the Home Page from time to time for updates on the Trust’s initiative to update and reprint these 4 historic texts.