Home » Library » Peaks and People of the Adirondacks 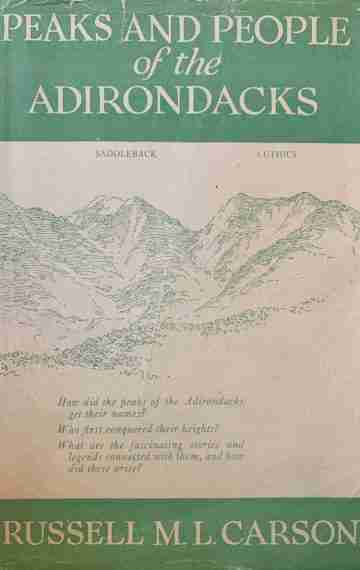 The third 1920’s era work of literature that fueled climbing the high peaks in the 1930’s and onward was Peaks and People of the Adirondacks (1927), authored by Glens Falls businessman Russel M.L. Carson (1884-1961), who later served as ADK’s 6th president (1930-31). The book was one of the critical texts that inspired early climbers, particularly the members of the earliest 46er group, the 46ers of Troy.

Formed at the start of 1937, the 46ers of Troy, considered the precursor to the modern Adirondack Forty-Sixers, Inc. formed more than a decade later and after WWII in 1948, was forged from a core group of parishioners at Grace Methodist Church in Troy, NY. The group was founded by Rev. Ernest Ryder, who had become 46er #7 in September of the previous year, and Edward Hudowalski (46er #6). Unlike the modern 46er club, membership in the Troy group did not require that you have ascended all 46 the summits, in fact only Ryder and Ed Hudowalski had done so at the time and, while several early members were nearing completion, many of the early members had climbed fewer than a handful of summits. Instead, membership required only that one be interested in climbing all the high peaks, climb at least one summit each year, and report on the climb to the membership.

With Grace (46er #9) a key player in the group, interest in the history and lore of the mountains was emphasized. In later years Grace often referred to Peaks and People as being bible-like in stature to the earliest 46ers and she could quote it from memory. Grace loved folklore and history and wove it into her professional life as Travel Promotion Supervisor for the State Commerce Department and for decades in her work as the Historian of the Adirondack 46ers, a position she held for the balance of her life.

Carson was a prominent member of the Glans Falls community in the 1920s and onward. He loved the history of the mountains to his north and west and was recognized as an authority on the history of the high peaks by Bob and George Marshall. It was Carson who had suggested to the Marshalls that they add 4 summits, Blake, Cliff, Couchsachraga and Gray to the original 42 to complete the list of summits exceeding 4000 feet that we know today at the 46.

Carson wrote a regular column for the Glens Falls Post Star entitled “The Footpath” in which he reported on the working of the newly formed Adirondack Mountain Club. His writings included historical sketches of the high peaks with information on first ascents and name origins and the like. Later Carson used his research to stimulate attendance at the local Rotary Club meetings. Originally, Alfred L. Donaldson (1866-1923), author of the two volume History of the Adirondacks, had intended to use Carson’s sketches as the basis for a third volume of his comprehensive history of the region. The concept never got passed the planning stages; Donaldson died before he had begun the third volume. After Donaldson’s death, Carson pulled together his research, articles and Rotary sketches and fashioned them into Peaks and People. Carson later donated the book to ADK which published the only official updated reprints beginning in 1973.

Carson’s significance in the development of high peaks climbing as a recreational pursuit and Adirondack history was on par with the stature of Grace Hudowalski in the minds of the 46ers and Carson and Grace, who were friends and colleagues in the publication history of ADK, were the subject of a petition in the early years of the 21st Century to rename the last of the two generically named high peaks, East and South Dix. It was Carson who had called the names assigned to those summits “place holders”, the names having been attributed to the Marshalls who referred to them by geographical orientation to the major peak in the range because they had no characteristic or common name at the time Marshall published The High Peaks of the Adirondacks in 1922. It was also Carson who had argued that the names of summits should have association with the people who were relevant to the mountain or local history.

True Adirondack lovers feel that the mountains which are most appropriately named are those that perpetuate the memory of men who have had a close connection with the region.

The petition urged that East Dix, with its unobstructed view of Schroon Lake, Grace’s second home from 1954, be named Grace Peak, and that South Dix be renamed Carson Peak. The effort to advanced Carson Peak stalled, although there are still some who refer to the peak by the proposed name.

Like The High Peaks of the Adirondacks and Friendly Adirondack Peaks, Carson’s Peaks and People has long been out of print, although ADK did add explanatory materials and publish an updated version beginning in 1973 which remained in active use through several printings for the balance of the 20th Century. First editions of the book can still be found on ebay and through antiquarian book sellers at significant but reasonable prices. Reprints are also readily available at a reasonable price. The Trust is considering Peaks and People for reprint as part of its Centennial Edition series of historic climbing literature in 2027/2028.

For any reader interested in learning more about Russ Carson, there is an informative article available on the internet entitled On Russell M.L. Carson and Peaks and People of the Adirondacks by poet David Crews which can be found at https://adirondackwilderness.org/russell-m-l-carson-peaks-people-adirondacks/.