Home » Library » The High Peaks of the Adirondacks 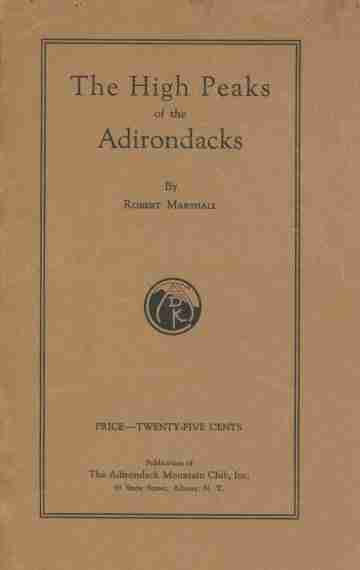 Published in August of 1922, Bob Marshall’s memoir recounting his adventure with brother George and friend Herb Clark in climbing the original 42 high peaks entitled The High Peaks of the Adirondacks was donated to the nascent Adirondack Mountain Club, formed that same year, and became ADK’s first fundraiser (the booklet sold for 25 cents per copy!) and the forerunner of the ADK guidebooks that were launched in the mid 30’s. In 1925, at the suggestion of Russ Carson (Russel M. L. Carson was, among other things, author of Peaks and People of the Adirondacks, which is the subject of a companion article) the Marshalls added ascents of 4 additional summits (Blake, Cliff, Couchsachraga and Gray) and became the first 46ers, a term coined some eleven years later by the 46ers of Troy.

Bob Marshall went on to study forestry and earn multiple degrees in the discipline before embarking on a career with the U.S. Forest Service. Bob was a prolific writer and explorer and ultimately became one of the preeminent advocates for wilderness preservation. Sadly, Bob died in the fall of 1939 when he was just 39 years of age. Nevertheless, his legacy in wilderness advocacy is preserved in the Wilderness Society which he helped to found and his writings on the subject. The 1922 memoir also endures as part of his legacy, inspiring the early generation of high peak climbers. The booklet fueled interest in climbing in the Adirondacks and became the roadmap followed to date by nearly 14,000 46ers. While the subject of Marshall’s work was local, its influence went well beyond New York State. That list of summits fueled similar interest in New England and elsewhere giving rise to one of the most popular outdoor recreational pursuits in the nation.

The Marshall/Clark perspective from 100 years past is both entertaining and instructive to modern climbers. When the Marshalls were climbing in the early 20th Century the high peaks region was a recovering wasteland of lumbering slash and scorched forest resulting from wildfires that tore through the area in 1903 and 1908. Marshall laments the scarred wilderness he saw all around him and it impacted the trio’s rating of the view from the 42 summits. Marshall valued wilderness scenery untouched by humans, something rarely seen today even on the most remote of the high peaks. When the Marshalls climbed there were a scant 14 summits with trails. The trail system we know today, including the unmaintained wilderness paths that grew up from thousand ascending the once untrailed peaks, came about after the formation of ADK and the constant flow of climbers following the Marshalls’ footsteps. And the wilderness recovered. Comparison between the before and the now helps inform out own ethics as the number of explorers to the fragile summits continues to surge.

Long out of print and today in the public domain, copies of Marshall’s memoire can be purchased as reprints and occasionally an original becomes available but at a handsome price. A facsimile of the original is available to the public through the nonprofit portal Internet Archive at https://archive.org/details/highpeaksofadiro01mars.

An heirloom quality Centennial Edition of Marshall’s work with a Preface tracing the history of the work and developments since its publication by Suzanne Lance (46er # 1805W) is being published by the Trust and will be available later in 2022 as part of the Centennial Celebration program at the Adirondack History Museum in Elizabethtown, NY on August 6, 2022. You will find information about the event and ordering the Centennial Edition of The High Peaks of the Adirondacks on our Home Page.