So here you are, atop Grace Peak, a mountain with a fine story to tell.

This is a little mountain among the 46 high peaks at just a tall fella’s height above the 4000-foot mark, the 42nd in height of the original 42 summits George and Bob Marshall included in their list of high peaks. It was one of the trail-less peaks and the only one where the summit register was fastened to a rock (all the others were affixed to trees on the summits).

The Marshalls and Herb Clark are credited with the first recorded ascent on August 13, 1921, although the area was heavily lumbered and surveyed and then burned in the fires of the early 20th century, so it is quite possible some lumberman or surveyor, maybe even a hunter, ventured to the summit before them without leaving a trace. That was the case with South Dix where a fella wrote to Russ Carson after reading Peaks and People, in which Carson gave the Marshalls/Clark party first ascent claim, and let Carson know he had been atop South Dix some years before the Marshalls when he became disoriented in the maze of tote roads that had been carved into the burned mess after the 1913 fire and missed his mark (Dix) and ended up on South Dix. But nothing like that happened with the eastern most Dix Range summit and so the record credit goes to the Marshalls and Clark as it did for many of the other lesser high peaks.

The peak had no name until 1922 when Bob’s High Peaks of the Adirondacks was published. There he gave the peak a placeholder name, as Carson suggested in Peaks and People, East Dix, the summit’s geographical position in relation to the principal peak of the Dix Range. As if prophetically setting the stage for future naming, Carson opined

[t]he most interesting fact about these two mountains [South Dix and East Dix] is that their names are not important enough to be retained and that they can be given distinctive titles, when the right occasion comes, without violation of old established names.

The path to giving this peak a distinctive name began about 1986 when a committee of ADK took up the idea of giving East Dix the name “Clark” to honor Herb Clark (46er #1). George Marshall was consulted and endorsed the idea, although he preferred the less-formal name Herbert, you will recall that is the name the Marshalls assigned to Iroquois thinking that name was assigned the peak we know today as Marshall.

Ironically, when the 46ers were consulted, their endorsement was not forthcoming, based in no small measure by Grace Hudowalski’s resistance to the idea. Grace thought the ideas of naming a mountain for Herb was grand but suggested one of the 100 highest summits in place of a high peak. She reminded the proponents of the ordeal she and others had endured securing official approval of Mount Marshall, but also expressed reservations based on the large volume of printed materials, books, brochures and maps and the like, which used the long-standing geographic identifier for the peak and which she felt would engender great confusion and require reprinting in some cases. Although Grace was never shy of taking on a challenge, in addition to writing thousands of personal letters each year to climbers, she climbed Cascade in August 1986 at the age of 80, she invoked a personal concern of sorts in opposition to renaming East Dix; “pity the poor historian who would have to explain this to thousands of hikers over the ensuing years!” The idea was ultimately dropped, and East Dix kept its placeholder name for almost 2 more decades.

In the new Millennium, a new effort was made to give the summit a distinctive name, and this time the object of the effort was Grace, who was in her mid-90’s. The effort started in 2001 and was formally taken up by the 46ers in the spring of 2002 when the club’s executive committee authorized submission of a petition to rename East Dix to honor Grace and South Dix to honor Russ Carson. Doug Arnold (46er #4693W) was tapped to chair the committee. With unparalleled tenacity, commitment and drive, Doug went to work.

Grace did not think much of the idea, although she had always thought Russ Carson should be given such an honor. Characteristically self-effacing, when asked Grace what she thought she remarked that naming a mountain for her was a “silly notion” but when pressed that there were many who thought otherwise, she commented “[w]ell, they are your mountains, too.” Grace was 94 at the time.

The basis for naming a peak to honor Grace seemed clear and had rumbled among Grace’s closest friend for some years. In fact, the 3820’ summit due west of Tabletop near Indian Falls had been claimed as Grace Peak complete with a summit canister until Governor Pataki swooped in and pushed a petition through in the late 1990’s to name it T.R. in honor of President Theodore Roosevelt.

But Grace’s unique and remarkable stature in Adirondack history was not to be denied and her place in the mountains needed to be secured, so the effort regrouped and focused on East Dix.

Known affectionately as “the Lady” and the “Soul of the Summits” by friends and in the press, Grace was the 9th 46er, the first woman to complete the feat. For more than 60 years, she accompanied thousands of climbers through many thousands of miles with personal correspondence. Meeting Grace at The Boulders was a pilgrimage to most aspiring 46ers, and she was always ready to greet climbers who dropped in, often unannounced, spouting off the details of their climbing history from memory and toasting new 46ers with a spit of Brut champagne, which was always chilling in the fridge. By the time the petition to designate East Dix Grace Peak was filed, Grace had welcomed thousands of climbers who had followed the path of the Marshalls and Clark.

Although Grace’s renown was largely regional, her reputation extended to a national audience and in the early 1990s a filmmaker from the west coast, the son in law of Johnny Cash, took an interest in Grace and over the course of the next decade assembled historic footage and produced The Mountains Will Wait for You, a full length documentary about Grace and her mountain legacy, securing his father-in-law’s historic homespun voice as narrator of the film.

Grace was a popular public speaker and a moving force in the development of NY State tourism in the mid 20th century. She received a great many accolades and awards during her 98 years for work promoting NY State, tourism, the Adirondacks, the High Peaks, outdoor recreation and regional history and folklore, had been cited by the NY State Legislature, and received awards and commendations from ADK and the 46ers. When the State, some years after her death, established regional Walks of Fame as part of its tourism promotional efforts, Grace was included in the inaugural class along with the likes of Seneca Ray Stoddard (writer and photographer), and her friends Robert Marshall (46er #3) and Dr. Ora Phelps (46er #47), all immortalized at the Adirondack Welcome Center in Queensbury, NY. In 2017 The Ticonderoga Historical Society placed a marker at Grace’s birthplace in Ticonderoga.

Despite Grace prominence in 20th Century Adirondack history and cultural heritage, the effort to rename the mountain was not a slam dunk and there was opposition, much of it paralleling the concerns Grace had herself raised about confusion almost 2 decades earlier, including from the State DEC, at least initially. But ultimately, ten years after her death, in June of 2014, the mountain got its new, permanent, and distinctive name—Grace Peak. The effort had taken twelve (12) tireless years.

As memorials go, there really isn’t a better mountain to serve as Grace Peak, although the easternmost of the little Dixes was not her favorite. Grace Peak is closest to her birthplace in Ticonderoga, and it is noteworthy that of all the persons whose names are associated with a high peak, Grace is the only documented Adirondack native. Franklin Hough came close but was born just outside the park boundary and Esther McComb is a legend, according to the thorough research of Sandra Weber.

All the high peaks, excepting only the 4 Sewards, are located in Essex County. Grace was in the county and lived in the county for much of her childhood and adult life. When Grace joined a group of seminarians and their friends in an August 1922 climb of Mount Marcy, she was an Essex County resident. Grace left for Troy, NY where she completed high school, met husband Ed, and lived in the Capital District for the balance of her life. But after WWII, she and Ed purchased their summer home, The Boulders, on the East Shore of Schroon Lake, making them seasonal residents of Grace’s home county once again. From the shore of Schroon Lake at The Boulders, Grace could see the mountain that would one day bear her name. Likewise, Schroon Lake is in full view to the south from the summit of Grace Peak.

The view from the summit of Grace Peak has certainly improved from the days when the Marshalls were exploring the Dix Range. The area was despoiled by lumbering and fire that detracted from the visual appeal. Nevertheless, Bob Marshall thought the view from Grace Peak “interesting and very different from any other” despite being marred by slash and fire; and today, having been reclaimed by a century of nature’s forced, it is indeed unique and breath-taking. Today the climber reaching the summit of Grace Peak is blessed with one of the most spectacular scenes in the mountain wilderness, surrounded by the Dix range, with views running down the ridge from Nippletop, over Dial, to Noonmark and Round, and then on to Giant and Rock Peak Ridge. Simply breath-taking.

The primary route to Grace Peak is the well-worn wilderness path from Macomb over South Dix which follows the herd path of earlier days. A second popular route ascents the slide on the northwestern face of the mountain after a lengthy trek up a well-worn path following the course of the South Fork of the Boquet River from Route 73.

Other possible and past approaches have been largely reclaimed by nature. A route up Etown 4 and Spotted Mountain is thick and arduous—although spectacular. Evidence of the fires of the early 20th century are still visible on the summits of Etown 4 and Spotted. An approach following the course of Mill Brook from the east into the col between Carson and Grace Peaks was popular in the days of the 46ers of Troy but seldom used today. 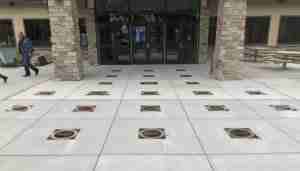 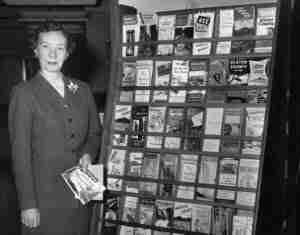 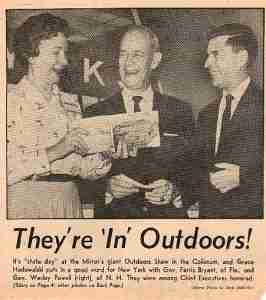 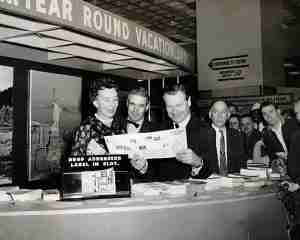 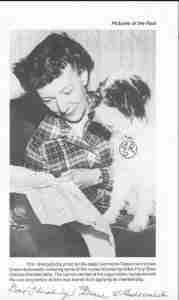 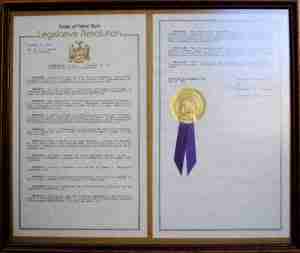