It has been called “Porter Mountain” and “Mount Porter.” Now it is known as just “Porter,” named in honor of a much-beloved summer pastor and friend, Noah Porter, who was part of a group that made the first recorded ascent of the mountain in 1895. He then hired Orson Schofield “Old Mountain” Phelp’s son Ed to blaze the first trail to the summit.

Porter. Is it Mount Porter, as Russ Carson called the mountain in Peaks and People? That is what the Conservation Department map called it too on its Circular Map of Mount Marcy Trails in the 1920’s and 30’s. One might think that the official endorsement notwithstanding the fact that Carson’s fellow Adirondack historian, Alfred L. Donaldson, called the peak Porter Mountain in volume II of his history of the Adirondacks of that same era. Today, it is Donaldson’s designation that has prevailed. USGS maps, the last of the 46er books, Heaven Up-H’istedness, and contemporary ADK guides all identify the mountain lying East of its neighbor Cascade and originally known as West Mountain as Porter Mountain.

What a puzzlement! But by no means unusual when it comes to the names of Adirondack features. Just wait until we get to the naming of the mountains named Marshall and Hough, and the McIntyres, and you will see what we mean. Adirondack Toponymy is at times a rigmarole of a random scoot to borrow from the vernacular of the 46ers of Troy.

Here we will adhere to tradition. Bob Marshall called the mountain “Porter” in 1922 in his memoire, The High Peaks of the Adirondacks, as though the summit was an old friend and that continued among the “old timers” and in early 46er books. Fittingly so, because the residents of Keene Valley named the summit in honor of a much beloved summer pastor and friend, Noah Porter, who was part of a group that made the first recorded ascent of the mountain bearing his name in 1875, and then hired Orson Schofield “Old Mountain” Phelp’s son Ed to blaze the first trail to the summit.

Dr. Noah Thomas Porter, III (1811-1892) was introduced to Keene Valley in about 1872 along with several notable Connecticut clergy who sought refuge from the summer heat of urban environs in the cool wilderness valleys of the Adirondacks. The list included such notables as Hartford’s Dr. Horace Bushnell, for whom a park and theater in Hartford are named, as well as Bushnell Falls in the AuSable Club property, and Mark Twain’s dearest friend, the Rev. Joseph Twitchell, a civil war hero of sorts who the Keene Valley locals affectionately called “Chaplain Joe.  Dr. Porter was a preeminent New England Congregational minister, a staunch and outspoken abolitionist, academic and educator, prolific author, lexicographer, philosopher, theologian, and 11th president of Yale University, a position he held for 15 years. Along with Bushnell and Twitchell, Dr. Porter took to the pulpit at the Keene Valley Congregational Church in the late 1870’s during his summer visits and integrated seamlessly and comfortably into the mountain community, becoming much beloved by his mountain neighbors.

A strong woodman, hiker and oarsman, Porter is remembered for one trip in particular, recounted by Carson in Peaks and People, in which he led several guides and friends on an arduous trip over Marcy, descending the Opalescent River, skirting Lake Henderson and then continuing up and through the rugged Indian Pass to North Elba. He was still a spry man in his mid-60’s, making the trip with greater ease and speed than much younger men.

Dr. Porter was particularly fond of the magnificent Upper Ausable Lake. As age sapped his strength in his final years, he elicited Mel Trumbull, one of the legendary Keene Valley guides of that era, to row him about the Upper Ausable, stopping at favorite spots to survey his most cherished views. According to Trumbull, Porter’s eyes welled-up with tearing as he sat in quiet thought, the saddest thing Trumbull had ever witnessed.

True Adirondack lovers feel that the mountains which are most appropriately named are those that perpetuate the memory of [persons] who have had a close connection with the region.  Little enthusiasm is stirred by such names as Marcy, Dix, Seward, and Wright which, though distinguished, do not call to mind [persons] who have had a direct personal relationship with the Adirondacks.  It is gratifying that the majority of the names honour [persons], both of high and low degree, who climbed the mountains.

Contrast the White Mountains, for example, where the most significant summits honor national Presidents with no association to the region.  But by tradition, Adirondack mountains primarily honor regional historical figures such as Colvin and Colden, Redfield and Armstrong, Emmons, Phelps, Street and Nye.  Carson followed tradition in promoting the naming of Donaldson and the 46ers of Troy followed suit in October 1940 proposing confirmation of summits honoring Mills Blake and the Marshalls.  The tradition carried forward to the modern era with Carson’s observation being the successful battle cry of those promoting the renaming of East Dix “Grace” to honor Grace Hudowalski, a petition granted in June 2014.

The history of trail-building to Porter was well-told by Jim Goodwin (46er #24) in his sketches of the 46 summits in Of the Summits, Of the Forests, the 3rd of the 46er books, published in 1991.  Of the more significant details, the first of the trails from Keene Valley blazed by Ed Phelp’s did not extend all the way to the true summit and, in any event, fell victim to the fire of 1903, replaced in the 1920’s by several other trails from the Garden area, including one built by Jim and his sisters, to the lesser summit.  The spur trail from Cascade was constructed about 1927.  Later trails were added from the Garden (currently closed to public use) and from Marcy Field over Blueberry Mountain.

Many climbers ascending Cascade from Route 73 take advantage of the proximity between Porter and Cascade to climb both in a single trip, a round trip of slightly more than 6 miles.  But overuse, parking congestion, and the need for a sustainable trail has resulted in the design and construction of a new trail from the Mount Van Hoevenberg Winter Sports Complex slated to open soon and closure of the Route 73 route.  The new trail is much longer, connecting to the bridge trail between the two peaks at about its midpoint, making the Blueberry Mountain approach to Porter a bit more appealing.  Once the new trail from Van Hoevenberg becomes the standard both routes will involve about the same distance and perhaps traversing the two will become the popular way to ascend both summits in a single trip. 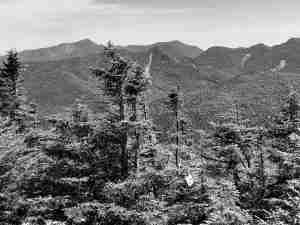 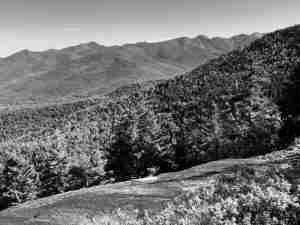 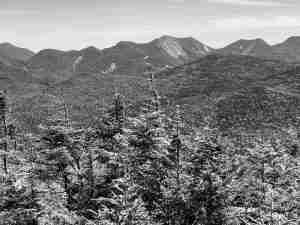 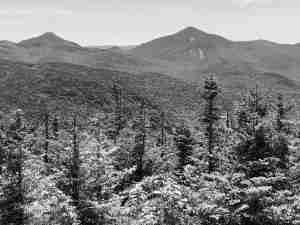 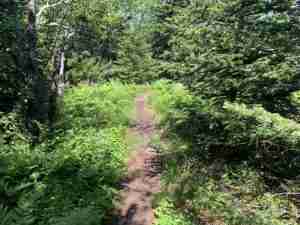 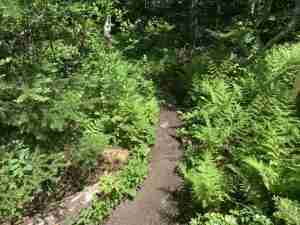 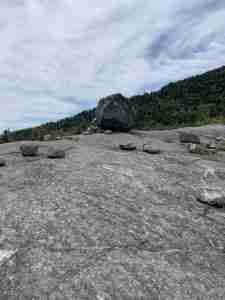 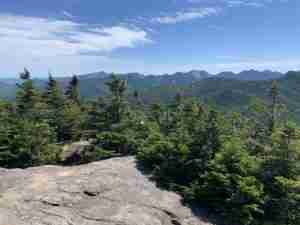